Living in the inhospitable: the borametz and the chipmunk

Posted on August 6, 2014 by louisewleonard 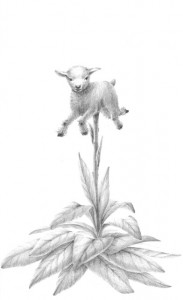 So, “educated Europeans” in the early seventeenth century believed that on the central Asian steppe lived plants that each grew a tiny, living lamb. Such a lamb, called a borametz, (right), was able to lean down and nibble the leaves around it until the leaves were all gone and the lamb died….  (that’s correct).

Meanwhile, below the surface of the sea are the following layers: the Epipelagic, the Mesopelagic, the Bathypelagic, the Abyssopelagic and the Hadalpelagic.

The Bathypelagic you might remember from the Bathysphere, a 4.75 diameter steel observation ball  lowered  into the sea off Bermuda in the early 1930s by engineer Otis Barton and naturalist William Beebe (below). 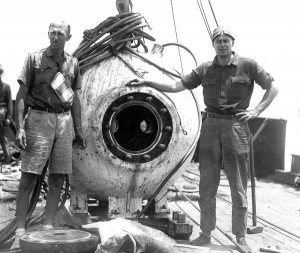 My favorite zone after the Abysso, oviously,  is the Hadal  — home of Hades? — and reaching from some 20,000 feet to the ocean floor at 35,000 feet; it is said to be about the size of Australia, (that’s correct) and is configured in trenches.

Vents on the ocean floor open into the earth’s hot core. From the vents stream hot waters and geysers, in which live new 400 species not seen on earth above. None require oxygen to live, but exist on such elements such as sulphur.

Meanwhile, back above, the white weasel in winter hunts 12 foot burrows dug out for safe houses by chipmunks. The weasels eat the little chipmunks as they hibernate and then curl up on the chipmunks nests. The chipmunks, luckily, do not feel pain, as hibernation puts them into a state of numbness known as torpor. 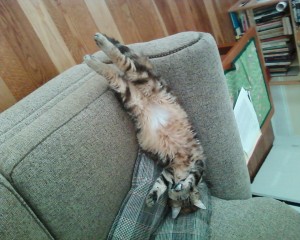 Last summer my cat , (left), brought me a chipmunk that expired before my eyes. After some cursing, weeping and a little digging with a spade, I buried it, besides a dead sparrow, in the backyard.

Ask me what to make of it, and I can only quote the Heinrich: “… the more inhospitable the environment, the more life seem(s) to flourish.”