Posted on February 25, 2015 by louisewleonard 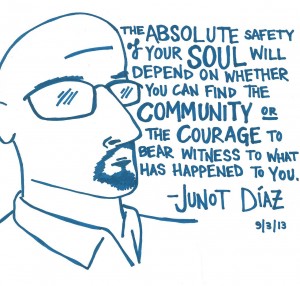 Finally I read someone who clarified my feelings about Junot Diaz for me. Yes, I love Diaz’ work: he has a visceral intensity and honesty that makes most other books look as insipid and banal as They Really Are.

But it’s true, he explains  away the particularly vile sexism of his characters as merely the reality of the culture into which he was born.

Not a pretty viewpoint he agrees, in interviews, but also, he seems to say with a shrug:  just the way it is. As in “yeah, that’s the culture I’m from.”

But he isn’t in that culture now, is he? He has lived not in the Dominican Republic but in the northeastern United States since he was age six:  he is a graduate of Rutgers, a professor  at M.I.T. and in 2012 a recipient of a five year “Genius Grant.”

Could he not reflect a little more on the culture he so brilliantly details?  Could he not — intelligent and sensitive as he is — have some opinion on it, rather than just replicating it — albeit brilliantly — that we might experience its heady wild virulence and passion.

Roxane Gay, she got it right.  The title of Diaz’ last book — one of my top novels ever — should not be  This is How You Lose Her, but This is How We All Lose.

She put her finger on it — on why I both love his work and yet am left a little unsure about it.. when will he take the next step?

For my part, I grew up with the British culture of communicating through verbal one-upmanship and verbal emotional violence:  eviscerating sarcasm and annihilating undertone could really beat you up, but as no one could see the bruises — well, if you complained about them, you were told you were “imagining things.”

This culture I do not write about just to have it witnessed. No; I will not just report or replicate it. I am telling you now:  it was Not Ok.

Author of 52 Men, Since You Ask, and others Also in The Rumpus, Tin House, Fiction Advocate, Gargoyle.
View all posts by louisewleonard →
This entry was posted in Uncategorized and tagged British cruelty, Junot Diaz, This is How We All Lose. Bookmark the permalink.