So I was upset when Franz Wright died last week. He is, as one obituary said, a “beloved poet” to many, including me. The first poems of his I read, twenty years ago now, took me by the throat and shook me.  Talk about a man who has lived. He spoke to darkness and to grief and to anger and to life — and he also, later, spoke to God.

I’d been watching him on Facebook for the past year or so. He had lung cancer, and was ill from opiates and withdrawal, and kept posting grueling videos of himself looking strung out and desperate, reading his poems right into the screen in a voice so low and ragged I could barely make out the words.

I checked with some people to see if he was ‘all right’ and they said he was, as such things went.

But he was asking, still on Facebook —  if he could give readings somewhere –this a Pulitzer Prize winner — for $5,000 a university visit.  I don’t know if anyone took him up on this and now he is gone.

It makes me so angry that a man such as he could die struggling in this culture — the same culture that gives a $2 million advance to a billionaire’s daughter for her vapid badly written ‘novels’ (yeah, I went to school with her.) I live in horror and dismay at the rise of the one percent in this country.

Then there is Franz Wright’s father James, who was also a Pulitzer Prize Winner in Poetry.  You know what he said to Franz, when he read his first poem?  “Well, it looks like you’re a poet. Welcome to Hell.”

God Bless Franz and all those who fight the good fight. We need you. I need you. I love you.

Thank you for plumbing the depths and writing for me.  Below, the very first poem of his I ever read, decades ago cut out of The New Yorker: The Comedian. 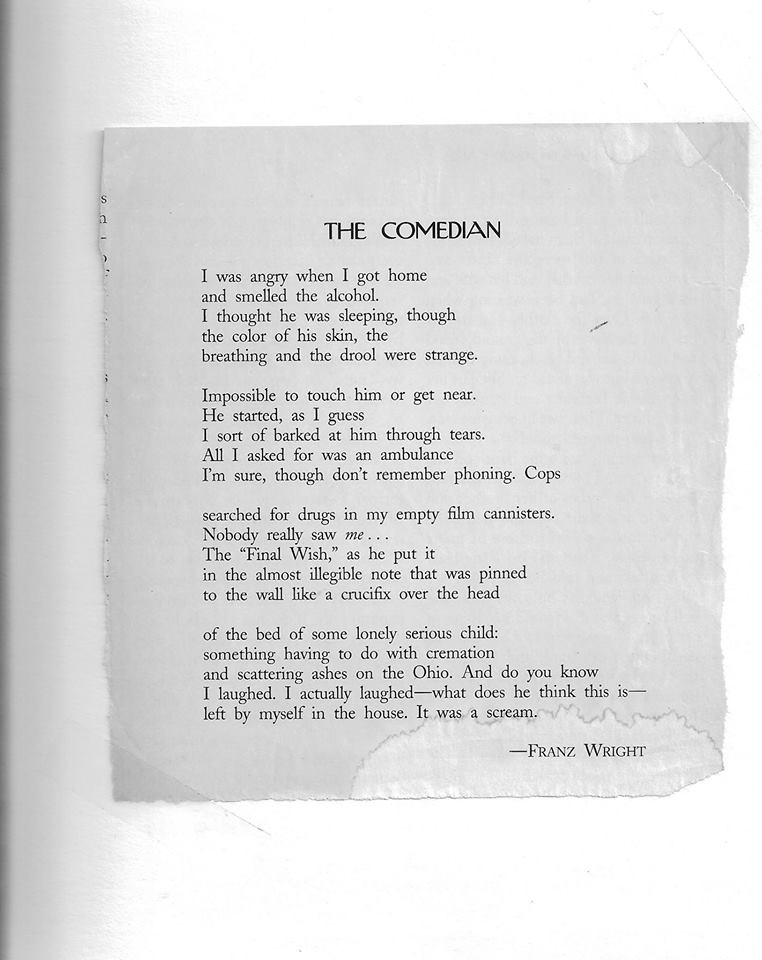 Author of 52 Men, Since You Ask, and others Also in The Rumpus, Tin House, Fiction Advocate, Gargoyle.
View all posts by louisewleonard →
This entry was posted in Authos and tagged Franz Wright, The Comedian. Bookmark the permalink.