Trump Threatens to Sue My Ass, a little story 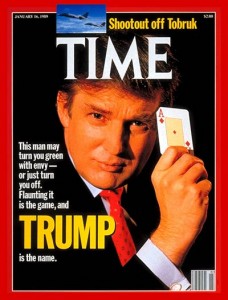 “Yes, he has won, but his victory is soiled and and has no pride.” So said Aeschylus,  and so say I, any day that I hear the voice of Trump, a voice I have had in my brain, since my youth.

It was on the phone. I was twenty and an intern reporter at TIME.  Trump was being sued by a hotel chain.  I called to  ask Trump about it, and straight away he started calling me  “Babe.” It was “Babe” this and “Babe” that and an occasional “doll.”  His voice was a sunbath.

Then I read aloud to him one of the allegations against him, which I had before me in an Affadavit.

You should have felt it — the change in atmosphere.

I wish I could say it was the last time I heard a man turn on a dime. But now —  as a woman more experienced — see 52 Men –I can say with  confidence: such is the method of charming insolent un-serious men.

And these men — men of a certain kind – how many times must they reveal themselves before we remember their true selves?  We must keep trying, I say. Keep trying until it Takes.