Exile: One Year In

Posted on February 20, 2016 by louisewleonard 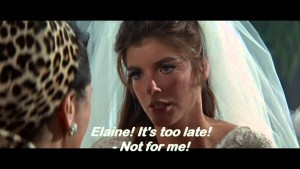 Remember the scene in The Graduate when Ben stands in the church above Elaine’s wedding tapping and calling out her name and her entire family stands around scowling and seething at him, something which Elaine sees and which spurs her decision to run away from them all?

Our desire to think ourselves loved by our families (and hence not fundamentally alone) has made a million psychiatrists rich, and a million lay people busy with the task of rearranging the truth and living in illusions so they can bear reality. But what happens when others come to you and tell you how others really perceive you, what they have been saying about you for years, in your presence and even absence — when all the well-meaning guides of your life have repeated, decade after decade, for thirty years, that your family is a danger to you? What then? What when you finally do believe them? When you finally face the truth and respect yourself enough to break away?

It’s freeing, of course, the moment of realization. It allows you to look elsewhere for your bond to life.  Such as, did you know, they think now that the cells of a fetus remain in its mother’s body all of her life (and beyond)? And did you know that if the universe is nothing but matter rearranging itself, death has no meaning?  And that your life does not have to be a struggle to be loved? It is only a matter of being with those who do love you?

So complex, human nature, and the lies we tell ourselves. I was watching the new film about the psychologist who performed the Obedience experiments in the sixties, and though it was shocking and disheartening, to discover that some 65 percent of people will obey orders to physically harm another if they believe they ‘should’,  that still leaves 35 percent who will break away, who will protest, who will endure the ignomy of not being obedient and accepted.  Are you one of the 35 percent?  If so, come to me.

Author of 52 Men, 2015. Excerpts in The Rumpus, Tin House, Fiction Advocate and Gargoyle.
View all posts by louisewleonard →
This entry was posted in Uncategorized. Bookmark the permalink.