Steve and me, from Flash Frontier in NZ

Posted on March 7, 2016 by louisewleonard

This piece, Steve, is from the new issue of Flash Frontier, An Adventure in Flash Fiction. They also run a quite a long interview with me about 52 Men:  Here.  Maybe I’ll write some more about that in the next few days — will have to check if I am ‘quotable.’  lol Meanwhile: to Steve Raea, reporter friend of my youth:

I work with Steve, at The Dominion. We are both reporters. He lives on Mount Vic, and other times with hi

s girlfriend Diane. She is much older, over thirty. Things happen, Steve says.

We take his motorbike around the bays. The day is blue and cool and the light gold. We stop at my grandfather’s house in Lyall Bay. We lie in my room, and drink wine, and fool around. We go out to Red Rocks, and drink scotch, where the great seals loll. We head out at midnight around the rocky hills along the ocean curves to Makara. We do this so fast, and so drunk, I think it might kill us.

Back on Mount Vic, in his single room above the harbor, he plays me Simply Red: If You Don’t Know Me By Now… You Will Never Never Never Know Me. He plays me “Tiny Dancer” from the 70s by Elton John. Tiny Dancer, he says, is the name he will give his boat. When he gets his boat, which he plans to do soon, and sail away. I start to cry, at the thought of this. Steve cups my head in his hand. “You’re so intense,” he says. “What do you think,” Steve asks, “is the value of that?”

Then he tells me he 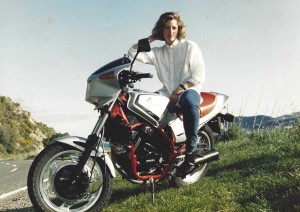 has something to say, something he realized when he saw my name in the newspaper. His father, he says, is not his biological father, but his stepfather. His biological father, Steve says, raising a scotch to me in his dim lit room above the dark harbor, “is your grandfather’s brother.” My grandfather? I ask. “Apparently.” My grandfather has more brothers than I have ever met. I pause. “So, we’re related?” I ask. Steve laughs. Steve clinks his glass to my glass. Steve reaches for the baby oil, to rub down my naked body. “I’ve been thinking, Steve says, “that I might change my name to your name.”

Soon, I take him to meet my grandfather. My grandfather takes him to meet his biological father. Diane buys him a new car and he moves in with her in Thorndon. Then he leaves the car in the garage and takes off to Tonga. He does not change his name. He buys a boat he calls Dancer and writes letters from the sea.