Me and Richard Peabody — Bonding over the SUV 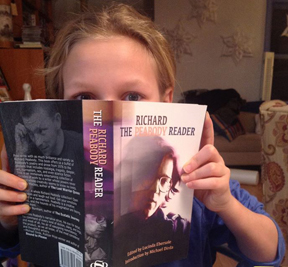 I’m choked up here, choked and not even knowing how to start describing as cool a player as Mr Richard Peabody when here it is, right in his own words right in front of me  (the way it always is with the best writers) Richard Peabody, to steal a phrase from one of his own stories is “one scrumptious cat.”

I first met him when I submitted a piece about the various whereabouts (thanks Courtney Love) of poor Kurt Cobain’s cremains to Peabody’s annual lit mag Gargoyle. I was moving at the time from one city to another in the southern hemisphere and had no fixed mail or email address. So Peabody, then in Washington, ended up tracking me down on the then rarely used vessel of Facebook.  Wo-ha! — 2007?– never again did I take Facebook or Mr Peabody lightly.

Almost ten years later and I met him in person at his own booth — of course — at AWP in Los Angeles — the (of course) long-haired too-cool-to-be-a-hipster scrumptious cat whose own personal Reader had just been put out by a colleague of his: The Richard Peabody Reader, ed. Lucinda Ebersole, Intro by Michael Dirda.

Unlike those college paperback tomes with unbroken screeds by the likes of Nietzche, this one has fancy fonts, plenty of white space and revelations, along with Neil Young lyrics, a riff on birds in Breugel and Bosch, a story from the POV of the man who ruined Elvis, (Colonel) as well as a tribute to Fiji water and a poem on the children of Derek Walcott (apparently there are many…)  It also has a triptych — and of course a triptych because Peabody is the King of form and of Experimental Writing. Just email him at Johns Hopkins for his personal list of greats as I did once. It’s why his Reader is so jumping.

As one, myself, who literally stalked (by moped) an expensive Australian suburb slapping self made stickers onto SUV’s and facing haughty indignation (and possible arrest) by rich overly decorated housewives (The stickers read:

you just know I would love this Peabody character:

“Am I Crazy, Hal thinks, or should people who drive SUVs be pulled from their vehicles and beaten with sticks?”

But Peabody is not clever for cleverness’ sake. Unlike, say a McSweeney’s humor piece that has no one inside it, a Peabody piece, whatever the form, always has Peabody in it.

His long form stories are real if surreal life: painful, rueful, amusing, tragic. Men make make dinner and mind the children, lusting over otherworldy fleshy creations. His male and female characters are serious, charming, often literary and eccentric : the white-chalked single mother mime from the Ukraine (in Key West), the wife who throws her art prof husband a birthday party in fishbowl IKEA (he’s sleeping with the nanny), the long suffering husband just trying to keep it decent.

Back to humor for a moment, my favorite work, which anyone who has been to a writing workshop will appreciate, is “Letters From the Editor” which consists of notes to students on their work (from which I select a few completely out of order, apologies Mr P):

TOMMY HILFIGER is a good name for a character. Love the jabs at Glamour, and the drunken fumblings. Reads like real life…

THE LEPRECHAUN PIECE HAD MOMENTS

WAITING FOR THE BUS seems so trivial.

LOVE THE ANCHOVIES AND THE allergic return to high school dreams. Hilarious…

LOVE HOW YOU USED THE oysters to frame the story. The rough sex is a good insight on both of them…

But perhaps  because Peabody showed it to me personally, the poem:  “I’m in Love with the Morton Salt Girl” is my favorite.  Buy this book for this one poem alone. You will feel good about the world every time you see a salt box for the rest of your life.  You really will. That’s a promise.

I’m in Love with the Morton Salt Girl

I’m in love with the Morton Salt girl.

I want to pour salt in her hair and watch

her dance. I want to walk with her through the

salt rain and pretend that it is water. I want to

get lost in the Washington Cathedral and follow her

I want to discover her salt lick in the forests of Virginia.

pour out and flood the aisles.  I want to sit in an empty theater

up to my eyeballs in salt and dream of her….

That’s the first half..

You can buy the Reader and see a much more scholarly description of it  Here .

And thanks to the man also for publishing excerpts of my 52 Men in Gargoyle 64. 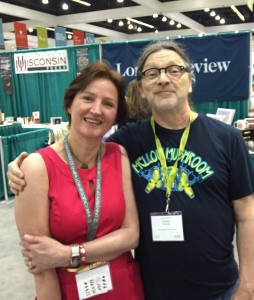 Me and Richard Peabody at AWP in Los Angeles, April 2016