Life is a Chemical Madness, me and Ron Shapiro

Posted on March 2, 2017 by louisewleonard 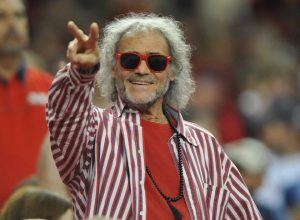 Here is my old friend Ron Shapiro. I was driving through the deep south, age 22, in a Drive-Away car (you pay for the gas and get to drive the car to a destination) when I landed in Oxford Mississippi to check out Faulkner’s home. After that, I stumbled into Oxford’s Hoka Cafe, owned by Ron, and the dear fellow must have recognized, after numerous cups of coffee and a slice of his cheesecake, that I was sleeping in said Drive- Away car, as he gave me his couch to sleep on that night.

I ended up living in Oxford for a year, working at the ER,  then Square Books. Ron, who later became Oxford Mayor, hooked me up with all kinds: Faulkner’s niece, Faulkner’s chiropractor, all the writers in town — Willie Morris, who drove me all around the delta, Barry Hannah who proposed that I marry a then briefly single Willie. Some of this is in 52 Men.

What is not, is that those were lucky days for me, an oasis in the madness of my chemical youth.  That’s what Fitzgerald calls it in the story I talked of yesterday, “A Diamond as Big as the Ritz.”

Everybody’s youth is a dream, a form of chemical madness.

Though if you want know the damn truth, in my case I would make that life. As in: my entire life has been a dream, a form of chemical madness.  Sounds right to me.

Author of 52 Men, Since You Ask, and others Also in The Rumpus, Tin House, Fiction Advocate, Gargoyle.
View all posts by louisewleonard →
This entry was posted in Uncategorized and tagged Barry Hannah, Diamond as Big as the Ritz, Fitzgerald, Oxford, Willie Morris. Bookmark the permalink.