Pictures of Lolita, Gaitskill and me

What do you think of when you think of Lolita? The answer is not always your fault. Publishers want to sell copies and sex sells, or can.  But Lolita, Lolita. I have been reading Mary Gaitskill’s essays, and in her essay “Pictures of Lo,” she puts it perfectly:

Lolita may be fairly described as a ‘threnody’ for the destruction of a child’s life…. 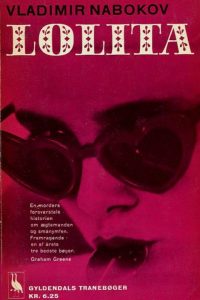 yet a high percentage of the covers go for cute.

In my adolescence, it was Lolita  in heart shape sunglasses, sucking a lollipop. And there have been some 150 other versions.

Lolita is the story of a young girl at the mercy of a step-father who responds to her nascent sexuality by targeting her, kidnapping her and sleeping with her as his captive step-daughter in one place after another until outsiders suspect. Her sobbing, which he sometimes hears at night, he duly, perhaps guiltily, hears but ignores.

When she finally escapes, she becomes — as many abused children do —  a denuded lessened figure, a shadow of what she might have been.

Mary Gaitskill’s collection of essay and reviews, Somebody with a Little Hammer,  is so forthright and perceptive and strong; Gaitskill sees through all of the nonsense and depravity of the convenient and willful transformation of victim to seductress. And I believe I know a thing about this, having had my last little work, 52 Men, treated as if my character were a happy go lucky nymphomaniac  (sorry, but no.)  I quote Gaitskill here, writing of Linda Lovelace, in Gaitskill’s essay “Icon:”

You don’t need special shrewdness or even much experience to recognize a predator; all you need is a working animal instinct.

But some people’s instincts have been ruined. Some people’s instinct have been so ruined by such disrespectful treatment that, for them, disrespect is not merely a norm; it has a kind of hyper-reality that is absolutely compelling. Such people don’t necessarily identify as masochistic in a conscious way… It’s hard to know them — that is, to know how hurt they are, and how intractable the damage is.

I do not know what happened to Gaitskill that she understands this. It is, perhaps, a good thing that I don’t, so it be not too reductive. But the point is, that somehow she does, and I totally relate to her.

In another essay in the collection a young person asks her in real time her why she loves him. She says:

You’re not somebody who just wants to hear nice bullshit.

You care. You want to know what’s real.

I love you for that.